An adjective is a part of speech used to describe something, which usually goes with a noun or noun phrase, giving more information about the object signified.

In English, adjectives usually go before the noun they modify (e.g., a big rock) and there is a certain order in which they should go (e.g., you can’t say *a red big rock).

Other languages have different rules, like where the adjective goes in relation to the noun it modifies, or what order the adjectives go in. Some languages only have a few adjectives.

Don’t assume that the rules for adjectives in another language are the same as in English.

An adverb is a word or phrase that modifies the meaning of an adjective, verb, or another adverb.

Adverbs typically express manner, place, time, frequency, degree, level of certainty, etc., Answering questions such as how?, in what way?, when?, where?, and to what extent?.

Examples of adverbs in English include gently, here, now, very.

Adverbs are usually considered to be a part of speech

An affix is an addition to the base form or stem of a word in order to modify its meaning or create a new word. An affix is a morpheme which can attach before (as a prefix), after (as a suffix), inside (as an infix), or around (as a circumfix) the stem or base form of a word.

The following chart gives examples of different kinds of affixes in English and in Kunwinjku:

The alveolar ridge is a hard ridge found just behind the upper teeth. 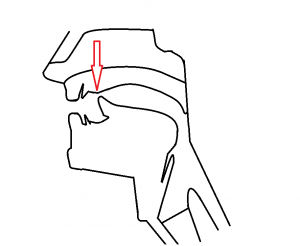 Many consonant sounds are made with the tongue making contact with the alveolar ridge, such as [d, n, t, l].

To feel your alveolar ridge, put your tongue on your top teeth then pull it back along until it touches the roof of your mouth (palate). You should feel a ridge between your teeth and the palate.

An article is a word that is used to define a noun as specific or unspecific.

Technically these are part of the word class known as determiners

Australian languages do not generally use articles, but have a range of determiners, which give grammatical information about a noun or noun phrase.

A clause is the next smallest unit after a sentence, it generally includes a subject and a verb.

For example in English the sentence:

After they cooked dinner, they ate it

After they cooked dinner

A consonant is a speech sound made with some closure or constriction of the vocal tract.

Contrasting with consonants are vowels.

Demonstrative words show which person or thing is being referred to.

They specify an entity in terms of the distance (real or metaphorical) from the speaker (e.g. this week, those books)

Examples of demonstratives in English include this, that, these, those.

Australian Aboriginal languages make finer distinctions in demonstratives than English does. They generally express distances in space and time, and may indicate things such as

Demonstratives may be marked for person and number

Demonstratives might also be marked for person and number, e.g.

A consonant sound made by touching the tongue tip to the teeth.

Examples in English include the ‘th’ sounds in ‘thin’ and ‘then.

In Indigenous Australian languages, consonants made in this position may be spelled as ‘th’, ‘dh’ ‘nh’ or ‘lh’

A determiner is a word, phrase or affix which modifies a noun phrase[glossary].

In English these can be [glossary]articles, possessive pronouns, and numerals.

In English, determiners include

In Australian Indigenous languages, determiners can include most of these, but not articles.