Irrealis mood is used to indicate that a certain situation or action is not known to have happened as the speaker is talking.  It’s a way of expressing an event or thing that is non-actual, or non-factual at the time that the speaker is telling it.

Note that all these sentences refer to situations that have not happened, they’re not currently ‘real’, consequently ‘irrealis’

The term ‘kinship’ is used to describe family relations, the connections between people usually based on bloodlines or marriage. Kinship systems vary across cultures and within Australian Indigenous groups there are many similarities and differences.

Kinship is often represented using family trees – below is a very simple one showing a female and her siblings and parents, with the English terms provided. 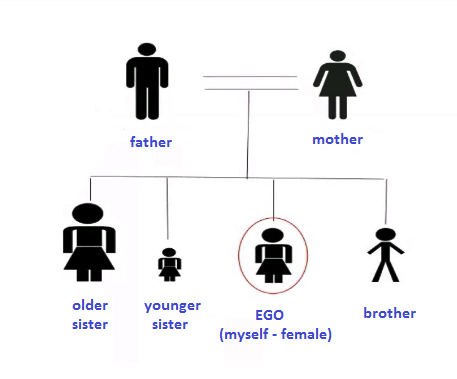 More information is available online about kinship in Australian Indigenous groups, for example the University of Sydney has an excellent online course exploring these concepts at http://sydney.edu.au/kinship-module/

A locative marker indicates the location of something.

In English, this is often done using a preposition such as at, to in, etc., but in many Aboriginal languages it is done by adding a morpheme to the noun.

eg. Kunwinjku manlabbarl = billabong, swam
kulabbarl = at the billabong/at the swamp (where ku- is the locative prefix)

Moieties are two social or ritual groups into which a people is divided.

Everything in the Bininj world view is made up of two moieties, Yirridjdja and Duwa. These are two halves of a holistic world view. Everything in the world, the countryside, nature and society is known to be of one, or the other (never both).

A man and his offspring are in one of these moieties, his wife and her siblings and their father are in the other. These have strong influences over ceremonial and relational activities and interactions.

Yirridjdja and Duwa are patrimoieties, passed down from the father’s line.  Some groups also have matrimoieties, which are passed down through the mother.  All Bininj belong to either the Ngarradjku or Mardku matrimoiety, and these affect marriage rules.

The word ‘moiety’ comes from the French word ‘moitié’ meaning ‘half’

The morpheme is the smallest meaningful unit in a language.

E.g., In English unbelievable can be broken down into three separate morphemes or meaningful parts of speech.

un– and –able are both affixes, and believe is the root of the word.

Each morpheme contributes meaning to the whole.

Australian Indigenous languages often have more nasal consonant sounds than English, including a retroflex nasal (written either rn or ṉ) and a palatal (usually written either nj or ny).

A noun is a word that functions as the name of some specific thing or set of things, such as living creatures, objects, places, actions, qualities, states of existence, or ideas.

In some languages, nouns can be grouped together in a noun class . They can often be marked for number (e.g., singular and plural)

A noun class is a particular category of nouns. A noun may belong to a given class because of characteristic features of its referent, such as sex/gender, animacy, shape, but sometimes there doesn’t seem to be any pattern linking words in a particular class.

Many European languages use gender (e.g., French has masculine and feminine, while German and Russian have masculine, feminine and neuter), while some African languages have many different noun classes (for example Swahili has up to 18 different classes, for example for people, plants, etc., but some groups seem to have no meaning in common).

Noun classes tend to ‘agree’, for example feminine nouns in French take the feminine form of adjectives and possessives (eg la grande table,  whereas masculine le grand livre). There are many objects in these noun classes that we would not often think of as ‘masculine’ or ‘feminine’. In Swahili, the noun class is shown on the noun and the adjective (e.g., mtu mzuri (good person) and watu wazuri (good people)).

Some Australian Indigenous languages have noun classes, including Kunwinjku, which has four classes, marked by different prefixes:

A noun phrase is a phrase which has a noun as its core component.

It can also have an other components which relate to the noun, but it does not include a verb.

E.g., The cat, a big mountain, their three young children, the first and only time, the man in the red car

A noun phrase can be replaced by a pronoun.

Number is a grammatical category of nouns, pronouns, and verb agreement that expresses how many.

English distinguishes between one (singular) and more than one (plural). Many Australian languages have words to indicate  two (dual), and sometimes three (trial).

English sometimes uses dual and trial, in words like twice and thrice or both, but it’s much more common in Australian Indigenous languages.